You are using a very old version of Internet Explorer, so some items may not work as expected. Please upgrade your browser.
Join/Renew Advertise Contact Log In Search

Thank you to all of the candidates for running!


Send Us a Nomination
It's never too early to nominate someone (including yourself!) for an APTA Washington elected position. Nominations are accepted all year but the deadline to submit a nomination for the 2023 election is August 1.

Positions on the 2023 ballot will be Treasurer, Eastern Washington At-Large Director, Professional Enhancement Panel Director, PTA Caucus Representative, Delegates, and Nominating Committee member.
Job Descriptions
Election Timeline
Resources for Candidates
Instructions for candidates:
- You may be nominated via the online Send us a Nomination form or through the Nominating Committee.
- Fill out the Consent to Serve Form by August 1.
- Submit information about yourself using the online Candidate Statement Form and send us your original digital photo file (not something downloaded from the internet) by August 15. 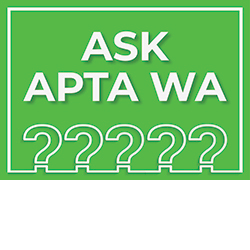